For 20 years, LA Opera Orchestra members have been greeted by a very special fan on their way to nearly every performance. Near the Artists Entrance, Tony stands as a sentinel watching and wishing each member well before they enter the opera house and the pit.

“It’s almost a pre-show ritual for some of us,” says Brady Steel, Orchestra Personnel Manager.

But just who is Tony? Tony is homeless. He spends his life on the streets of Downtown LA and before most shows, he’s the first smile that greets members of the orchestra as they arrive.

Tony’s only mode of transportation was a clunky old bike, which he found on the street a few years back.

One day, James Conlon greeted Tony before a performance of Macbeth and realized that his bike was nowhere to be found. He asked Tony where it went and Tony said the bike had recently been stolen.

Worried about how Tony would travel from place to place, Maestro Conlon decided to take action. He and the members of the LA Opera orchestra chipped in to buy Tony a new bike.

Before the final performance of Macbeth, Conlon and members of the orchestra presented Tony with a brand new bike. Their longtime friend was very emotional upon receiving the gift and thankful for his new mode of transportation.

LA Opera Orchestra members and staff are excited to see Tony again when he undoubtedly will find his post outside the artists entrance before the next show. 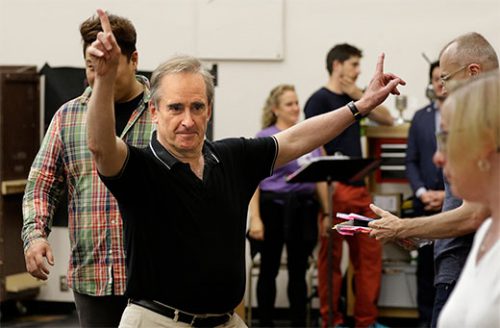