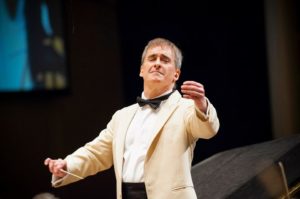 The voice at the other end of the phone was unmistakably that of a man in a hurry.

James Conlon was calling from Rome, only a few hours before he was to conduct Teatro dell’Opera di Roma forces in Tchaikovsky’s “The Queen of Spades,” a new addition to his enormous operatic repertory. “Cosi Fan Tutte” – a Mozart masterpiece he has led on numerous occasions around the world, including twice at the Ravinia Festival – would claim his attention the following night.

But clearly Ravinia also was very much crowding his thoughts, since the 65-year-old American maestro is stepping down as music director of the Chicago Symphony Orchestra’s annual residencies at the festival, after 11 seasons.

That lone statistic, however, doesn’t begin to tell the full story of the Conlon-Ravinia connection.

Their fruitful association began 38 years ago, in 1977, when the New York-born, Juilliard-trained conductor was 27 and just beginning his podium ascent. To a very real extent, Conlon cut his conducting teeth at Ravinia, before establishing his reputation in the operatic and orchestral realm via permanent posts in Rotterdam, Cologne and Paris.

Annual guest appearances at the Chicago Symphony’s summer retreat, from 1977 to 1990, forged the close working relationship between Conlon and the CSO musicians that made his appointment as Ravinia’s fourth music director, which took effect in 2005, as natural as it was inevitable.

Conlon is bidding adieu to Ravinia – make that arrivederci, given his recently announced appointment as principal conductor of the Turin-based Orchestra Sinfonica Nazionale della Rai, the official ensemble of the Italian public broadcasting network Rai, as of 2016-17 – with five programs that recall key repertory areas and themes from his nearly four decades with the festival.

His retrospective will remind concertgoers of Conlon’s thoughtfulness as an interpreter but may not convey the fierce intelligence and absolute dedication to the task at hand that have marked his 38-year association with the festival.

Nor will it answer the big questions – why is he stepping down now, and is he doing so on his own volition?

“It was time for changes in (my) life,” the maestro replied. “I have worked every summer for 40 years and I simply want to have more freedom and flexibility in general, in summer specifically. I love Ravinia, I love the Chicago Symphony, and this is not at all the end of my relationship with the orchestra.

“There was no pressure for me to leave, absolutely none – it was my decision,” he added. “In discussions with (Ravinia President and CEO) Welz Kauffman, I had proposed going about it in a certain way, and he was very gracious and happy with that.”

I was talking with one of the CSO violinists a few days ago, and he recalled when they performed all 10 Mahler symphonies in one summer under Levine. Things are really changing up there – not sure you can consider it a classical music festival anymore…

Perhaps not so coincidentally, Conlon also will step down as music director of the Cincinnati May Festival, after 37 years, in 2016.

It’s no secret that Ravinia has been working hard to reverse the decline in audiences for Chicago Symphony performances in recent years at the festival, especially among young people who aren’t all that connected to the classics.

Although 2014 brought an uptick in classical attendance – Ravinia reports having sold an average of 2,100 (of 3,400) pavilion seats for CSO concerts last summer – the administration continues to hedge its bets by stepping up its popular CSO movie nights, having long since relegated most Chicago Symphony classical concerts to weeknights, thereby freeing up weekends for more commercial rock and pop attractions.

Such moves may or may not have affected Conlon’s decision to leave – he is mum on the matter – but they have provoked concern among Ravinia’s old-guard classical fans and CSO musicians alike.

In light of the above, it will be interesting to see whether the festival, in the immediate post-Conlon era, will continue to embrace such valuable, if esoteric, artistic initiatives as his “Breaking the Silence” survey of music suppressed by the Nazis and forgotten after the fall of the Third Reich.

Conlon is bringing back one of the signal discoveries of that survey with his CSO performance July 29 of Alexander Zemlinsky’s symphonic poem “Die Seejungfrau” (“The Mermaid”).

The Ravinia board will take its time before naming a successor, according to a statement in the festival’s announcement in August of Conlon’s stepping down. Guest conductors, including former Ravinia music director James Levine, are to fill the void for the next couple of seasons.

“We will continue to look at the extraordinary number of conductors whom we have been missing at Ravinia, as well as festival favorites such as Levine,” Kauffman explained in an email earlier this week. “Ravinia audiences will continue to enjoy special projects as they always have, going back decades … even without music director input.”

Ravinia may begin exploring the guest curator/artist-in-residence model that has proved successful at Carnegie Hall, Southern California’s Ojai Festival and other places, perhaps to begin with the Leonard Bernstein centennial in 2018, the CEO added.

What, then, will the Conlon years be remembered for?

Many things, certainly, not least his cycles of Mozart piano concertos and operas, but also the complete Mahler symphonies, along with Mahler’s “Das Lied von der Erde” and rarely heard cantata “Das Klagende Lied.” No Conlon project was more welcome than the semi-staged concert performances of six Mozart operas (including “The Marriage of Figaro,” “Don Giovanni” and “Cosi Fan Tutte”) he led with winning young casts and a chamber version of the CSO, in the intimate Martin Theatre.

His operatic swan song as music director will be a concert performance of Wagner’s opera “The Flying Dutchman” – which has never been done complete at the festival – to wrap up both his tenure and the CSO residency on Aug. 15.

Personal favorites among the countless performances Conlon has conducted at the festival?

“I keep trying to answer that question in my mind and really can’t,” he replied. “What is more meaningful to me is having had the experience and relationship with the CSO on a consistent, ongoing basis.

“What is so impressive about this orchestra, for me, is their ability to produce on such a high musical level constantly. Together we have done up to four different programs a week at Ravinia, and the excitement has been there every time. You really get a special take on that level, that accomplishment, when you spend three or four weeks with them, as I have done for so many summers. That’s the biggest thing I will take away from my experience with the CSO at Ravinia.”

Just because Conlon is leaving Ravinia doesn’t mean he’s kicking over his musical traces domestically. His contract as music director of the Los Angeles Opera, a post he has held since 2006, runs until 2018. He said he intends to remain active in the U.S. as a guest conductor. As a matter of fact, he’s scheduled to conduct a week of CSO subscription concerts downtown in December.

But his decision to focus much of his conducting activity in Italy for the time being reflects an abiding affinity with that country’s cultural life that his eight-weeks-per-season appointment to the Rai orchestra – an ensemble with an impressive 84-year history—helped to crystallize.

“I’ve been away from Italy for more than 10 years, and, to be frank, I miss it, and my family misses it,” Conlon said. “It’s no secret that I love Italy. I’ve never held a position there before. At the Rai I will be able to do more adventurous programming than I could do in a lot of places in America and Europe. So this (appointment) seemed perfect for me.”

I was talking with one of the CSO violinists a few days ago, and he recalled when they performed all 10 Mahler symphonies in one summer under Levine. Things are really changing up there – not sure you can consider it a classical music festival anymore…

Conlon also enjoys a longtime association with the Festival dei Due Mondi (Festival of Two Worlds) in Spoleto, Italy, where he led his first opera more than 40 years ago. In June, he launched a three-year cycle of Mozart’s Lorenzo Da Ponte operas with a new production there of “Cosi Fan Tutte.”

I brought up the subject of the New York Philharmonic’s search for a music director to replace Alan Gilbert and asked Conlon if taking on that job, or any other post with a major American orchestra, is something he’s actively seeking.

His reply was diplomatic and to the point.

“If there’s an orchestra that’s interested in having me, I would always be open,” he said. The implication was clear: Conlon’s plate is full enough for the immediate future, although he wouldn’t rule out accepting a major U.S. podium at some point down the line, provided he believed it to be the right offer at the right time.

With the curtain about to rise on the Rome Opera’s “Queen of Spades,” there was time for one more question. Does Conlon have any regrets about repertory he wasn’t able to conduct at Ravinia?

“I could easily cite 100 pieces I’d like to have done,” he replied, with a laugh. “You can only do a fraction of what your imagination tells you. Actually I don’t have any regrets about anything. I look back at my life at Ravinia as I look back at my life in a lot of places, and I have a lot of gratitude. I have been living the way I want to live – conducting and doing what I love to do.”

James Conlon certainly fits the profile of the jet-setting modern maestro. Music director of the Ravinia Festival since 2005, he has racked up {…}