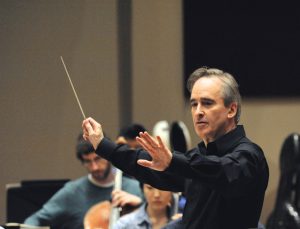 James Conlon, one of the top classical music conductors in both North America and Europe, had to take the brutal “red-eye” flight Sunday night from Los Angeles, where he presides as music director of L.A. Opera, to reach Toronto in time for a Monday afternoon rehearsal with the Toronto Symphony Orchestra.

Even so, Conlon, the guest conductor for this week’s TSO concerts (Wednesday at 8 p.m. and Thursday at 2 p.m.), was in top high-energy form as he led the TSO musicians in a rehearsal of Tchaikovsky’s fourth symphony.

But the piece on the program likely closest to his heart is the rarely heard violin concerto by Erich Wolfgang Korngold. The reason for programming this piece, Conlon explained in his dressing room after Monday’s rehearsal: “Because I like it.”

Indeed, Conlon has made something of a crusade of promoting the music of classical composers of the 1930s and ’40s whose work was neglected because of Nazi domination and the Second World War.

And to accommodate the schedule of the TSO’s visiting star soloist, Norwegian violinist Vilde Frang, the rehearsal of the first half of the concert program was scheduled for Tuesday rather than Monday.

But on Tuesday morning, the TSO got a surprise. Frang cancelled her appearance, her first since wowing TSO audiences in 2013, due to scheduling and transportation problems.

The TSO did not provide specific details of what went awry . “The TSO does not discuss artist travel and accommodation,” its press office said in reply to a query, which served to put my imagination into highly speculative mode.

There is not a long list of musicians who can step in on short notice and play the Korngold piece, but one of them happens to be Jonathan Crow, the TSO’s concertmaster.

Crow, a violin prodigy from Prince George, B.C., joined the Montreal Symphony at the age of 19. In 2006, he became the youngest concertmaster to lead a major North American orchestra. He’s an advocate of contemporary music and has played the violin under the batons of many famous conductors, including Charles Dutoit, Yehudi Menuhin and Mario Bernardo.

“It’s always an interesting thing when you come in as a last-minute replacement,” says Crow. “There’s a different learning curve. I’m happy it was the Korngold concerto because it’s a piece that I have in my fingers and I love to perform. Working with James is great because he knows the piece so well.”

At 65, Conlon is at the top of his game. In recent years he has been music director of not only L.A. Opera but also the Ravinia Festival (the summer home of the Chicago Symphony) and Cincinnati’s May Festival. However, he has announced he will step down from the former post next summer and from the latter post in 2016.

Conlon’s great triumph earlier this year was leading L.A. Opera’s stupendous revival of the rarely performed extravaganza The Ghosts of Versailles. It had a legendary premiere at the Metropolitan Opera in the early 1990s but, owing to its size and costs, has rarely been seen since.

I was thrilled to see it in L.A. in mid-February and amazed that it was a considerable improvement on the Met’s original production. At the end of the evening, I was fervently hoping the Canadian Opera Company would find a way to bring it to Toronto’s Four Seasons Centre.

Conlon finds Korngold, the son of a music teacher, a fascinating composer.

“He was a child prodigy,” says Conlon. “Mahler called him a genius. He was writing good pieces even as a teenager.”

By the 1920s, Korngold had become famous for composing operas.

Then in the 1930s, Korngold left Vienna and went to Hollywood, thanks to the legendary director Max Reinhardt.

“In Hollywood, Korngold raised the entire level of serious music in films. He made the quality very high.”

His score for Anthony Adverse (1936) won the Oscar. And he wrote the scores of many other major studio films.

In that era, Hollywood was enhanced by the arrival of many refugees (mostly Jewish) from Hitler’s Europe. Southern California was a beautiful paradise but at the same time, being aware of what was happening in Europe, many of them, were not content to remain there.

After the war, Korngold returned to Vienna, hoping to reconnect with the classical tradition of his homeland. But the result was sad and disappointing.

While he was away, he had been forgotten. His work was unappreciated by audiences whose tastes had changed.

“Nobody knew about him,” says Conlon. “It was very sad.”

Dejected, Korngold returned to Hollywood, where he died in 1957 at age 60.

Today, Conlon believes the work of Korngold and other composers exiled during Europe’s darkest days deserves to be celebrated. He hopes to help reveal to TSO audiences why.

And since Korngold’s death, with the release of some of his movie music, a revival has begun.