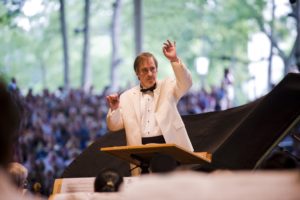 James Conlon, music director of the Ravinia Festival, has a mission. Since 2005 he has championed music by composers from Germany, Austria and other Eastern European countries, some Jewish but some not, who were silenced by the Third Reich.

This summer he’s opening his stay at Ravinia on Tuesday in the Martin Theatre, conducting members of the Chicago Symphony Orchestra in chamber music by Hanns Eisler, Paul Hindemith and Erich Wolfgang Korngold. The following Tuesday (July 29) in the pavilion, he conducts the full orchestra in works by Erwin Schulhoff, Otto Nicolai, Felix Mendelssohn, Carl Maria von Weber and George Gershwin and in assorted jaunty numbers by Johann Strauss Sr. and his far more illustrious son.

Korngold was one of the lucky ones. He found great success writing Academy Award-winning film scores. “But who has heard his chamber music?” asked Conlon, when reached by telephone in Los Angeles just after an extensive conducting tour of Europe. “We’re doing his String Sextet in D that he wrote when he was 19. Today we know his Violin Concerto, but this chamber piece is extraordinary.

“What if the history of Europe had been different?” Conlon mused. “There is a gap of two generations in the history of classical music. I want the music of the composers of that era to be heard.”

Eisler’s music and the poetry by his colleague Bertolt Brecht was also banned, but they were both able to escape, eventually meeting in Los Angeles, where the composer wrote music for several Hollywood films. After World War II, Eisler’s leftist leanings led to his investigation by the House Un-American activities and he left the country. He settled in East Berlin and composed, among other things, the (East) German Democratic Republic’s national anthem.

Conlon is conducting the CSO in the Scherzo movement from Schulhoff’s Symphony No. 5. He has recorded the entire work and played the Scherzo in a concert last April with Los Angeles Philharmonic. Richard S. Ginell, who reviewed the concert, called the Scherzo “a terrific piece of thunderous, aggressive, angry, relentlessly churning writing.”

Schulhoff, a Czech composer inspired by jazz, has one of the saddest stories. Doubly in peril from the Third Reich for his Communist leanings and his Jewish heritage, he was sent to a concentration camp and died there of tuberculosis at age 48.

Through his Ravinia years Conlon has performed music by Viktor Ullman, Alexander Zemlinsky and Franz Schreker, introducing some composers barely known, as well as Kurt Weill, who achieved permanent fame.

“James is on a passionate mission to ensure that these composers and their works are not lost to history,” he said. “He’s engineered performances around the world to fill a void left in the musical timeline of the 20th century.”

Like Conlon, Kauffman understands that the goal of performing the works is not to create instant musical hits. “Whether audiences embrace these works or not, he just wants them to listen without prejudice. … Some audiences resist attending such concerts fearing that they will be too dark or heavy or chaotic, but for the most part the suffering of the Holocaust is not the subject of these works, but simply the period.”

Conlon affirmed, “The music of these composers was born out of the same tradition as Mozart, Beethoven and Brahms. They belong on programs with those composers.”

In addition to Ravinia performance, the maestro has presented operas and songs by silenced composers at two other places where he is music director, the Los Angeles Opera and the Cincinnati May Festival. They also turn up on his guest conducting programs, which he has done throughout the United States and around the world.

In 2007 Conlon was honored with the Crystal Globe Award from the Anti-Defamation League during a dinner at the Ravinia Festival. It was presented to him by the late Michael Rubinstein of Highland Park. “Michael was on the executive board of the ADL,” said his wife Audrey, who is a member of the festival’s board of trustees. “We became friendly with James after he came to Ravinia. Michael really lobbied the ADL for this award because James was on a one-man mission to resurrect the music of composers whose music was lost due to the Holocaust.”

On that August evening Conlon spoke eloquently of the motivation of his mission, citing the grave injustice of suppressing the music of so many composers. Lost lives cannot be restored, he said, “but for these composers, you can do the one thing that would have meant the most to them which is to perform their music.”

Conlon remains to conduct Chicago Symphony Orchestra programs in the pavilion, culminating with Richard Strauss’ “Salome” with Patricia Racette in the title role on Aug. 2. He returns to conduct Mozart’ “Don Giovanni” Aug. 14 and 16, and “The Marriage of Figaro” Aug. 15 and 17, both in the Martin Theatre with musicians from the CSO and symphony chorus.