“Be guided by this, there are three roles in this opera and three roles only: Lady Macbeth, Macbeth and the chorus of the Witches.”—Giuseppe Verdi

In 1847, Giuseppe Verdi stood the world of Italian opera on its head when he wrote his tenth opera in seven years. (He would later refer to that grueling period as his “years in the galley.”) This was no routine work. In writing Macbeth, he made a major leap into the future—his future, Italian opera’s future, our future. It would take half a century for the logical consequence of Macbeth to be fully drawn, and even then it would take another 50 or 60 years before its significance was recognized.

With this opera, Verdi began the long process of dismantling the forms he inherited from Rossini and the bel canto period. In so doing, he irrevocably transformed Italian opera. Dramatic coherence became dominant. It is in Macbeth that he stipulates, with an insistence and virulence beyond what he had demonstrated in the past, what the singers must do to serve the drama. He no longer accepts the status quo, neither in the comportment of the singers, who must now act with their voices as well as their bodies, nor in the overall form of the music. Verdi chooses musical forms that fit the dramatic situation. The opera is not a series of formulaic scenes designed to showcase the vocal prowess of the performers, but a concentrated distillation of the dramatic essence. As he instructed baritone Felice Varesi, his first Macbeth: “I will not cease to recommend that you study the dramatic situations and the words: the music will follow on its own.”

Verdi articulated an attitude that was fundamentally contradictory to all of the contemporary tenets of bel canto. He admired soprano Eugenia Tadolini, the proposed prima donna for a revival in Naples, but in a letter to his original librettist, he wrote that her qualities were “too great for this role… [She] is a fine figure of a woman, and I would like Lady Macbeth to look ugly and malignant. [She] sings to perfection and I would rather that Lady didn’t sing at all. [She] has a marvelous voice, clear limpid and strong; and I would rather the voice were rough, hollow, stifled. [Her] voice has something angelic in it. Lady’s should have something devilish…there are two chief pieces in the opera, the duet between Lady and her husband and the sleepwalking scene, and these pieces must not be sung at all—they must be acted and declaimed in a voice that is hollow and veiled.”

No doubt there is some exaggeration and hyperbole in these instructions, but it was meant to be a potent antidote for the self-absorption and excessive vanity of the typical singer of that time as well as an indication of the path that he—and his singers—would follow.

For Verdi, the music must reflect, express and embody the drama.

The drama must be served by the music. (As Shakespeare wrote in Hamlet, “Suit the action to the word and the word to the action…to hold as ‘twere, the mirror up to nature, to show the virtue her own feature.”). Still relatively young at the age of 33, Verdi was firm in his convictions about the morality of art, and he saw the profound humanity and insight for which he himself strove in the revered figure of Shakespeare.

To be accurate, his attitudes were already evident well before 1847, but the intensity of his own inspiration prodded him to seek new forms and techniques to fulfill what he considered the demands of his favorite poet and exalted dramatist. It was not just labor, but a labor of love and devotion.

Compared to Otello and Falstaff—Verdi’s late-career masterpieces, similarly drawn from Shakespeare—his Macbeth seems less consequential. But that is only because we judge it by the measure of a standard set by the composer himself. Viewed in comparison with the composer’s contemporaries, and with many of his owns works of the period, it looms large. Had Verdi died or ceased to compose after Macbeth, it would stand today as a towering work of the Italian repertoire.

The composer has been accused of trivializing and simplifying Shakespeare’s original tragedy. In his defense, all composers have pillaged and plundered the great literary works as their muses dictated. But few composers did so with Verdi’s profound attachment and reverence. All dramatic and literary works must be radically shortened to accommodate the operatic theater. Literature, prose theater and opera are completely separate genres, each with its own rules, necessities and exigencies. An opera is a work of art in itself, which will sink or swim according to the composer’s ability to justify it on its own terms. It cannot be the original; it should be its own “original.” Verdi put it this way:

To show the many aspects of Verdi’s evolving musical and dramatic language in detail is beyond the scope of this essay. But here’s one major innovation that exemplifies the radical nature of his vision: Macbeth is a loveless opera, “un opera senza amore.” George Bernard Shaw’s adage that “Italian Romantic operas are about a tenor and a soprano who want to make love, and a baritone who won’t let them” is utterly unseated. No compromise was to be made to the expectations of the public to provide a stereotypic cast of characters in each vocal category. There is, in fact, no antagonist. The only desire expressed in this opera is the desire for power. There is no battle of equals, only an inner conflict with arrogance and insatiable ambition, and the corrupting lust for power. It has also been observed that Verdi’s opera is a tragedy for the royal couple, but a comedy for the witches.

Throughout his life, Shakespeare loomed large for Verdi, who always kept a volume of the Bard’s works at his bedside. The composer created three operas based on his plays. He wrote Macbeth for Florence in 1847—interestingly, Shakespeare’s Macbeth didn’t have its Italian premiere until 1849, two years later —and he revised the opera for Paris in 1865. Decades later, a venerable and venerated master, he wrote Otello (1887) and Falstaff (1893).

Fascinatingly, another Shakespeare play haunted his mind for much of his life: King Lear.In 1865, Verdi had a complete libretto, but for a variety of reasons, and despite a few false starts, he seems never to have gotten very far with the music. The prospect of a Verdi Re Lear remains perhaps the most tantalizing “what might have been” in the opera-loving world.

James Conlon is celebrating his tenth year as the Richard Seaver Music Director at LA Opera. 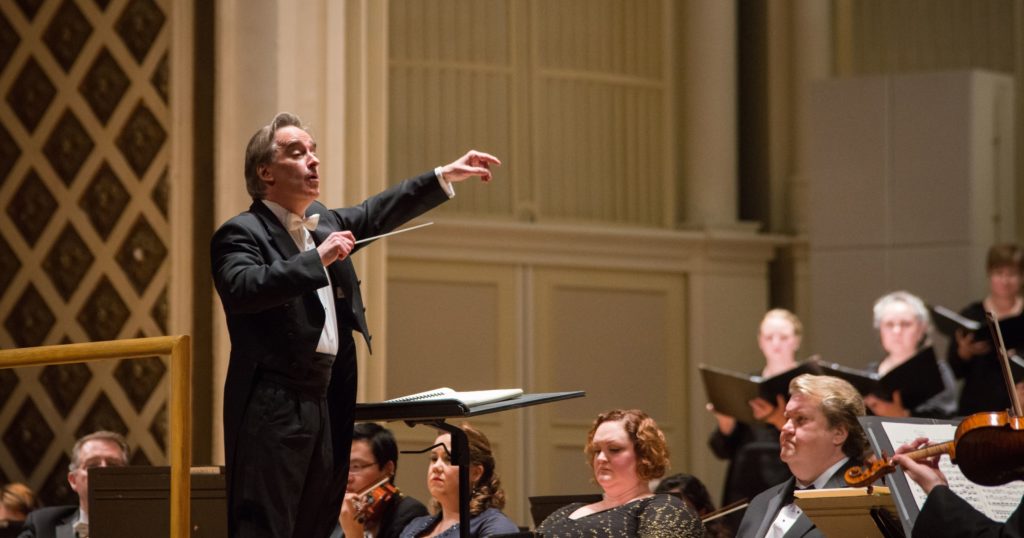 James Conlon’s storied 37-year tenure as the Music Director of the Cincinnati May Festival officially came to a close this year. The 2016 May {…}