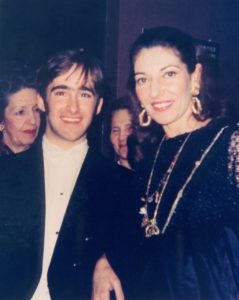 Customarily, I write a program note focusing on the work we are presenting to the public.

This time around, exceptionally, I am writing a more personal note. In welcoming audiences back at the beginning of the new season, I particularly want to address those who are seeing and hearing Giacomo Puccini’s opera for the first time, and, more specifically, to those who may never have seen any opera at all. I hope it will be the beginning of a lifelong love of opera.

In my life, La Bohème has represented a beginning so many times that I cannot eradicate the association of Puccini’s music with “the new.” Youth, the romantic story of a young couple in love, their so-called “bohemian” circle of friends, the sad death of its heroine in the full bloom of that youth—these elements helped place this opera among the most universally loved. All of the dramatic and theatrical elements are, of course, the traditional stuff of operatic stories, but it is Puccini’s music, his innovative theatrical genius and its renewable energy, that have rendered it seemingly eternal.

La Bohème was not the first opera I saw, but at age 12 it represented my first “professional” experience. I sang in the children’s chorus (including the whining little boy in Act Two who wants yet another toy). At the opera’s end, one of the singers said to my mother, “Your little boy will have La Bohème in him for the rest of his life.” And so it has come to pass.

A few months earlier, my grandmother had rewarded me for having gone shopping with her and said I could buy a record. It was the first LP in my collection. I think it cost 99 cents. It included tenor Jussi Björling singing Rodolfo’s first act aria “Che gelida manina.” At Christmas, my parents (or maybe Santa Claus, in whom I, of course, already didn’t believe) gave me my first complete opera recording: La Bohème with soprano Renata Tebaldi.

At age 21, in my last year of studies at the Juilliard School, I got my first big “break.” I took over a production on relatively short notice for the American Opera Theater. It was to have been conducted by Thomas Schippers, and when he was taken ill, I was asked to continue the preparations until another conductor could be found. But then, supported by the recommendation of Maria Callas (who had watched me rehearse), Peter Mennin, the President of Juilliard, chose me to conduct. Only once before, as an assistant, unrehearsed, had I led a single performance in a pit. Now, at Juilliard, this was to become the first opera for which I assumed total artistic responsibility. It was to initiate my professional life. The opera? La Bohème.

Six years later, La Bohème became the first Italian opera that I was to conduct at the Metropolitan Opera, and my first collaboration with Plácido Domingo. In 1988, I recorded the soundtrack of La Bohème, the first of three commercial movies I would make in the ensuing years. In 1995, La Bohème initiated my nine-year tenure as Principal Conductor of the Paris Opera. In 2011, it was my debut at the Rome Opera, a collaboration which continues into the present.

My enthusiasm for La Bohème, born at age 12, remains intact to this day. What has increased with time is my admiration. It is about as perfect as an opera can be, not a note too many nor one too few. It makes its point concisely and rarely fails to be powerfully moving. (When it does, the fault typically lies with some element of the performance.) Theatrical and dramatic, its tightly structured form is exemplary. Puccini’s musical storytelling is without peer. Even after a lifetime of hearings, seeing how this is accomplished is part of the attraction. As is often quipped among those of us in the profession: “Nobody goes to La Bohème to see how it ends.” We know how it ends but watching how the composer carries us from A to Z is riveting.

Many firsts in my life, all apparently coincidental. Or maybe not. There are often unseen forces in such matters. Now, it is the first production of LA Opera’s 2019/20 season. I hope it is a first for some of you attending these performances, the first of many, and an opera you will hold dear for the rest of your lives, as have I.